I simply forgot to post this painting during my last post. I had the background lying around from some extra paint I had on the palette. The collage pieces have been literally laying around for ages. They are just bits of old paintings and whatnot that I cut up and put into place. Sometimes, in the studio, I have a great need to throw together something fast, and this piece was done in less than an hour. It is a simple little painting (and everything on it is paper collaged onto the background, except for the stems and the little yellow lines at the bottom), but I didn't want to forget about it. 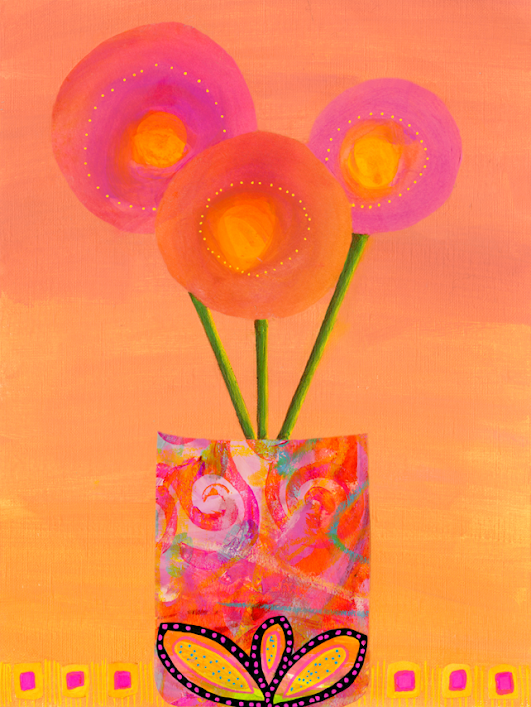 I took a few days off to recover from the 2nd Moderna vaccine shot I was given on Friday. I got the vaccine early because I used to work part-time for the school system. On Thursday, I will go back into the Studio and see what types of havoc I can create.
I am still way too hesitant to begin my oracle deck. I have a terrible fear of jumping in on this one. I have already painted the backgrounds - all 54 of them. I did this six months ago, if not longer. Each a different color of the rainbow. Maybe I am afraid to ruin them. But I could easily also do them digitally, but then I will have somewhat wasted my time and ruined 54 pieces of good paper. I went around and around in circles in my mind on this ... whether to do these cards by hand or digitally. I settled on by hand, because I had the backgrounds I wanted to put to use, plus I thought it would be much more fun. Yes, it would be messier. I am going to just leave flourishes and glitter, and the titles to be done by me later, digitally. It will be my first deck, and if it turns out well, and isn't too agonizing, I will do more.